BÜRO ALTON ROAD IS NOW OPEN, CHECK IT OUT.

The Buzz on Büro.

Büro Group, a South Florida co-working company, opened its fifth location in the SOMI Center building located at 5966 South Dixie Highway in South Miami.  Since opening its first space in Midtown in 2010, the Büro community has grown to include over 500 dynamic companies providing vibrant co-working spaces in Miami’s best neighborhoods. Its other locations are in Sunset Harbour, MiMo and Coconut Grove.

“We are proud to be part of the changing local business landscape and thriving entrepreneurial ecosystem,” says Michael Feinstein, founder and CEO. Hailing from Montreal, Feinstein moved to Miami in 2009 after spending seven years in London, working in real estate development and hospitality management.  He observed that there were “no great options for creative work space.  Starbucks and coffee shops housed entrepreneurs – there’s got to be a better way!”  And with a $1 million investment and branding of the concept, Feinstein opened his flagship location in Midtown. 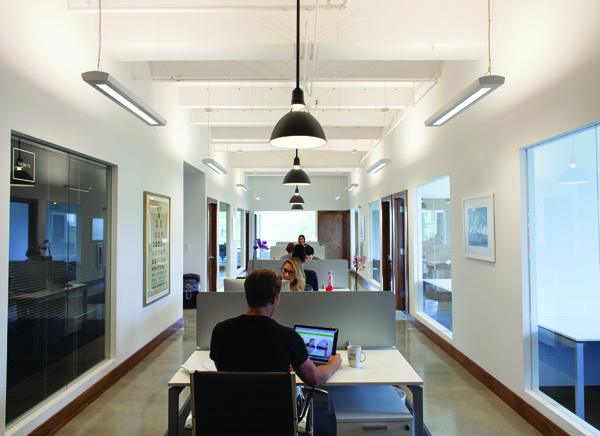 “Büro is all about community, creativity and flexibility.  We want to pull entrepreneurs and freelancers out of lonely living rooms and unproductive coffee shops. We want to rescue small companies and creative agencies from soulless office spaces and executive suites. We want to bring together smart and talented people from diverse industries to form a powerful and inspiring community,” espouses Feinstein.

In searching for this newest location, he zeroed in on the “non-traditional architecturally interesting building” at 5966 South Dixie Hwy.  South Miami is a great choice: “we love the local vibe and amenities of the neighborhood,” said Feinstein.   In August 2016, he leased two floors of 13,000 sq. ft., spending four months in planning and design, and six months in construction.  The stunning build out was designed by interior architect Adriano Garcia, with Fanny Haim & Associates, providing the interior design.  The centerpiece is a magnificent circular staircase of welded iron and fanned wood steps,   Displaying local artists’ work throughout the work space, Feinstein noted that the interior staircase “came out as a piece of art itself.”

Büro SOMI opened in June 2017, and in the first six weeks, 18 out of 31 spaces are occupied.  Roughly 50 companies are expected to share this new space. 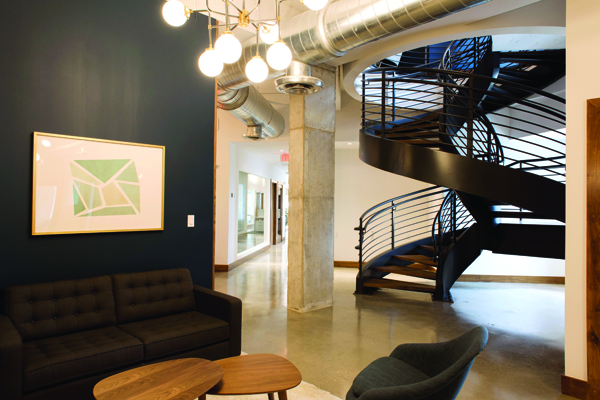 Like its other locations, Büro SOMI offers upscale stylish communal spaces with flexible month-to-month membership and workspace options for individuals and teams.  Members of Büro SOMI also benefit from monthly networking events, workshops, and exclusive discounts at restaurants and shops.

Its locations serve about 800 members from 350 companies attracting entrepreneurs, freelance workers, creatives, small businesses and satellites for national and international corporations,  including Airbnb, Gilt Group, Glamsquad and Lyft.  At the SOMI location some of the companies are: Emerge Americas, Thema TV, a French company, Silver Rock Financial, a hedge fund, Agranco Corp, U.S.A., is a manufacturer of agriculture and industrial products, real estate company Connect the Dots, and creative firms such as Marini Design, and SimpleFly.

Michael Feinstein is one of the local pioneers that is building a network of co-working centers.  The company was recently awarded “Best Co-Working Space” by Miami New Times. (2016). Feinstein notes: “And most of all, we want to make Mondays as exciting as Fridays.”

Running a Business, Sharing an Office.

Büro's Next Location is Hollywood!